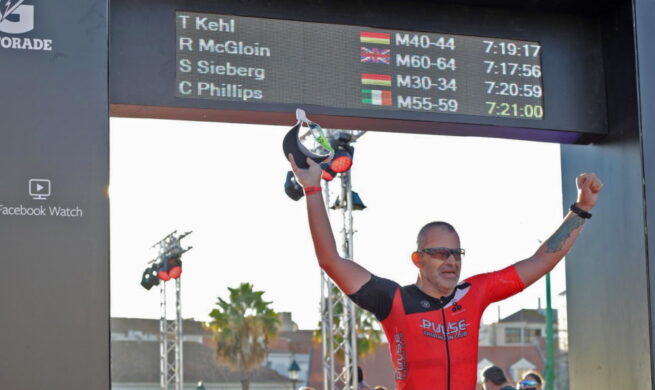 Well Ciaran, how’s the form? How’s everything going for you?

What can I say… You catch me as I’m still buzzing from an amazing few days in Portugal. This has been a very strange year with a lot of uncertainty, but for me anyhow the year is ending on a positive note.

I have never been the sporty type. I hated team sports growing up and still can’t understand the passion that some people have for certain ball based sports. In my late teens and early twenties, I got involved in martial arts. It was a very obscure form of traditional Kung-fu and I loved it. However as with most things at that age life gets in the way and that was put on the back burner. Roll on 30 years and the middle age spread started so it was time to join the gym again. Through the gym I got involved in kickboxing but I was a bit old for getting the head kicked of me and it wasn’t doing what I needed for my overall fitness. Then I met Debbie Carr. I went to Cascais in 2019 with Debbie, Grant Jacobs, Clare Malone, Gordon Miggin and Marion Goodall. Myself and Gordon were the cheerleaders as the others did the 70.3 and it was there that I got hooked. The atmosphere at 6am in transition on race morning was unreal … literally electric. Then watching the race and seeing every age shape size and ability crossing that line, the stupid thought came into my mind that I could do that. My only obstacle being that I couldn’t swim at all and I couldn’t run and my first time on one of these new fangled modern bikes I didn’t know how to change the gears.  Minor things I know but with Debs as a very patient swim teacher (I don’t take instruction very well) and herself and Aimee as run buddys in the early days and park runs, and hellfire runs with Eoghan Finnegan, things started to fall in place and then the next logical thing was to join pulse and do this properly.

My first race was a duathlon in Athy. I hadn’t really got a clue what I was doing. For the first run I paced myself alongside Grant Jacobs and thankfully wasn’t dead when I got on the bike. I loved the bike !! It was a lovely flat route with the wind in our backs. I started passing people on the way out and I thought this is great. I’d target the person in front of me go hard till I caught them, overtake, rest a bit and then target the next person. What I never took into account was that as soon as we hit the turn around point the friendly wind that was on my back would no longer be friendly or on my back and had turned into the wind from hell. The overtaking stopped but I was determined that nobody would overtake me on the way back. So it was a hard full on cycle all the way back. Then onto run 2.  This was the first time I had ever experienced a brick run. I knew about the brick … I had been warned about it but no words can describe that absolute helpless feeling in your legs after pushing too hard on the bike. It was only a 3km run but I have since discovered it takes me about 5Km to settle into a run. That was the toughest 3km I have ever run. Lessons were learned that day and thankfully some of those mistakes haven’t been repeated.

This is a tough one as I’ve only done 1 duathlon, 1 aquathon, 1 aquabike, 1 sprint, 1 Olympic and 1 70.3. I don’t think sprints will be for me … too much effort in too little time and no margins for error. I enjoyed the Celtic Warrior Olympic that was a very relaxed race and I really enjoyed Cascais 70.3 so I think I’m cut out for the longer distances.

The whole experience I had in Cascais in 2019 especially watching Debbie, Marion, Clare and Grant run across that finish line was amazing. Also having the honour of being able to support Gary Smith on his back to back Ironman charity event. I was more tired getting of the bike after doing 90km with him than I was after the whole 70.3

It is without a doubt the people. The amount of knowledge and experience at your fingertips is brilliant. From the track runs, the long distance runs, the Balrothery swims, the open water swims even training weekends away. If you have a question I can guarantee there’s someone in the club that has the answer.

For the last two years there has been nothing but swimming pedalling and running and the usual boring stuff like work. In my pre triathlon days I was into photography but that has really taken a back seat. I might get back into it when things settle down a bit more. Either that or swap all my photography gear for a nice TT bike …. now there’s an idea

I mentioned earlier that I don’t like team sports but the one sport I will watch is international rugby and the memory that sticks in my mind is undoubtably Irelands grand slam win against Wales in 2009. If every team sport had as much drama and suspense as that did I’d have a lifetime subscription to sky sports .

This year I managed to get baseline times in the sprint distance, olympic distance and the 70.3 so the goal for next year is to beat those times ….  And most importantly not come last again in anything.

Bookwise I’m going through a Peter Clines phase a sort of Lovecraftian sci-fi genre. I find it hard to get into TV shows these days but I did manage to watch the whole of Squid Games and enjoyed it. Movie wise I’m just a sucker for leave your brain at the door type movies. Superhero movies, Jason Statham, Keannu Reeves, Denzel Washington, Ryan Reynolds … you know the type.. ignore the gaping holes in the plot and the lousy continuity and just enjoy the action and the one liners

I have to listen to music when I’m running on my own especially the long runs.  I currently have a couple of playlists downloaded from spotify specifically for running. I find the proper beat helps me find a nice rhythm for running

Until I joined Pulse I didn’t know what determination or dedication was. I also didn’t know how stupid some stupid ideas could be. I was fortunate (?) enough to fall in with a crowd of individuals who have shown me what they mean. Debbie Carr who has patiently coached me for the past year and believed in me even when I didn’t and taught me that training isn’t just for nice sunny days when you feel good.  John Goodall who just doesn’t have ‘I can’t’ in his vocabulary and sometimes seems to forget the meaning of words like ‘flat, short, slow, easy etc.’ Eoghan Finnegan for the running genius that he is and all that I have learned from him. Gary Smith and his lessons in self belief and that you can do anything if you put your mind and training into it. Richie Barber for his gung ho ‘I will if you will’ attitude. It was a night of ‘I will if you will’ whatsapp messages that resulted in me signing up for Cascais. The determination Marion Goodall has shown in her return to training put me to shame at times. And then there’s Aimee Carr, Grant Jacobs, Joe Sweeney, Nicola Molloy, Clare Malone, Gordon Miggin, Colin Jennings, Noel Geraghty, Kevin Culligan and David Gregg who embody the whole spirit of the club and make training fun. Well maybe not always fun … sometimes they make it just a little less unpleasant.

Find a good club. Surround yourself with the right people. A good mix of people who take it seriously and those who take it less seriously is essential. Set targets for yourself. Pick a race and book it and train towards it. It is so much easier to train towards a goal. Training is not always fun. You’ll always have good days and bad days and I’ve found that it’s the bad days that make you stronger. And remember that there’s no such thing as a stupid question. If you have a question ask it. And practice your brick runs … that will make your life so much easier. If I, a middle aged man can go from being a non swimmer non runner and mediocre cyclist can do this .. so can anyone.

I have seven solo skydives under my belt. It was a long time ago but I’ll tell you one thing ..  it was a lot more terrifying standing in the holding pen waiting for the swim to start in Cascais than it was hanging off the wing of a plane.