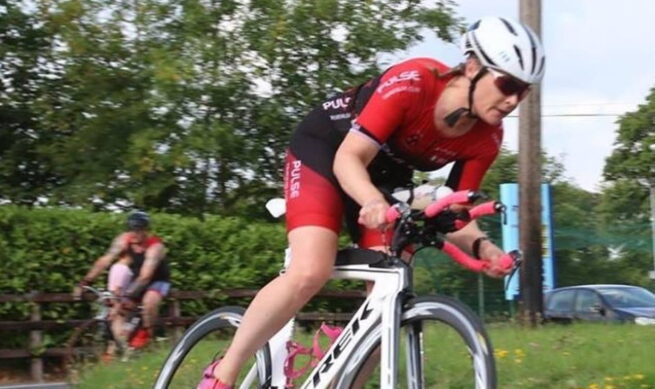 Well Joanne, how’s the form? How’s everything going for you?

Not too bad. I feel like we’ve been in some sort of limbo for the last year but hanging on for the light at the end of the tunnel. Getting a little bit of motivation back with the hope of doig#ng some sort of race this year.

Turning 30 I wanted to regain some feeling of fitness after doing pretty much nothing in my 20s. With the recession after hitting I found myself with lots of spare time in the evenings so took up running so that I could get fitter and try some things I’d always wanted to try like surfing. I had just moved back to Dublin into an apartment right beside the Phoenix park and had the perfect venue for running. The notion of a triathlon was mentioned by a friend and it was a little thought that would not go away so I got the bike on the bike to work scheme and joined one of the other Dublin clubs to bring on my swimming which I hadn’t done in about ten years. That august 2010 I think …I did Dublin City Tri and loved it and couldn’t wait to do another but with one thing and another I didn’t manage to do another triathlon for 5 more years and landed back to Dublin City Tri again in 2015 .. this time as a pulse member. I was working with fab lady Emma Cooling who I was in awe of as she swam biked and ran everywhere.  She said I should join her amazing club so I did and she was right… great club great people.

So long ago. I rocked up good and early to Dublin Garda rowing club… I had spent lots of time practicing the transitions and watching videos because I hadn’t managed to really get to know anyone in the other club I had joined. So I was petrified of making an idiot out of my self and looking like a complete amateur. The swim was in the Liffey and that went ok. About 15 minutes of anti drowning techniques and I was out. Off running with my bike to the mount line. I could not get my balance back to get on the bike at the mount line. One of the stewards had to hold the bike so I could sit on and then I was off for the 16km bike. Back then they did a super sprint which had a 600m swim a 16km bike and 4km run. Then the run with jelly legs. But I finished and I was over the moon to see that I wasn’t last but somewhere round the middle.

Oh that’s a difficult one.  Its not really a single point in time but the run up to Ironman Barcelona and the race and the celebrations after. I loved the comradery in the training for the Ironman with the there being such a large group that year and the support on the day itself.

What’s the best thing about being in a triathlon club?

The people. No matter what question you have there’s always someone to help. The best thing about pulse that I found was the female friendship. The willingness of other girls wanting to bring you along and pump you up and support you.

Work … I’m an interior designer and it can be a very hectic job with tight deadlines.

Hmmm I played GAA as a kid and I suppose I loved the competition back then. My mother had us do every sport available to us.  I suppose that if I had to single out one memory its that of my mother standing at the side of a river in Cavan and coaxing me to go and join the swim class.  Its how it all started.

I dont have any big aspirations for heading to kona but I’d like to do a 70.3 in somewhere like America or New Zealand.. something a bit different.

What’s the next triathlon goal you’d like to tick off?

I’d like to do a triathlon anywhere any length this year. I miss it. Gdynia 70.3 is in August so that’s next on the list and would love to think I’ll be there but it’s looking less likely.

What are the go-to tunes/podcasts for a training session? Lately I’ve found a renewed love for Daft Punk. “Rollin’ and Scratchin'” is a great tune for the turbo. A bit old school but if you want a more mainstream answer Dermot Kennedy is a good choice too.

Who inspires you, be it in sports or in regular life? The ladies of pulse who were so supportive when I joined. They normalise achievement in sport. Also ladies like Catriona Mc Kiernan who we grew up close to.

To a new member – It’s a difficult time to see the benefits of what a club like pulse can bring but hold out and when we get the chance to train and race again as normal it will be so worth it.  There is always someone to help, or to train with and you will end up with a great social circle too.