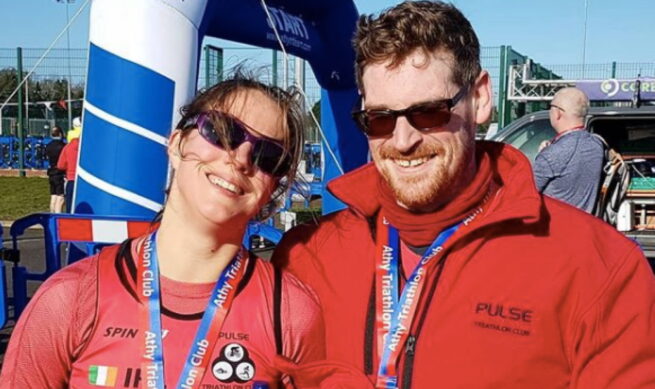 Well John, how’s the form? How’s everything going for you?

In my early 20’s I used to rockclimb, mountaineer, surf & mountinboard (skateboarding down grassy hills on a board with big tyres), I had a series of injuries one after another – all mountainboarding related. Which took me out for a long time. In that time I piled on the pounds – which made returning to sport difficult and I just gave up.

I found myself in my early thirties hugely overweight with a kid that could barely walk – but that I couldn’t keep up with. Things had to change.

I decided to take up running, but very quickly (within 500m of starting) I realised I’d have to be realistic. Over the course of two years I started walking at night when the kids went down. I then got back to hill walking, then finally I could run without the body being torn apart – I did a couch to 5k, then 10k, and up to half marathon. I hit a plateau and was rapidly falling out of love with running.

There was no great desire in me to do a triathlon, but I figured – fuck it, its gotta be less boring than jus running.

I traded our DVD collection for a 2nd hand road bike and signed up to the Naas Duathlon.

Tell us about your first race

The duathlon was my first experience of multisport, and I had no clue what I was doing (some things never change), I went out on the first run way too hard, brought enough water on the bike to cross a desert and nearly had a heart attack when my legs decided not to work on the second run.

On the bike I got encouragement from two pulsers and another on the run, I had decided to join before I had even reached the finish line – this community of unitard wearing masochists were surprisingly welcoming and friendly.

The event was freezing cold, the coffee van never showed up, there was no medal, and I felt like a complete imposter poured into a trisuit – yet for some reason I absolutely loved it.

I’ve only done one 70.3, so I’m not certain (more research to be done), but that seems to be my preferred distance. I enjoyed being able to settle into the race, have time to think and really take the event in and enjoy it.

Sprints are painful and over in a flash, brilliant in their own way, but not really for me. Olympic is a great distance, short enough to push it, but long enough to enjoy it.

I like the club events, the craic on the start line of the Hill or swim TTs is always great, everyone’s out for a laugh and nothing is taken seriously. But my standout Pulse memory is Athlone 2019, a group of about 12 of us travelled down in a giddy caravan for the Olympic, it’s a no pressure event with a swim that starts uphill in the Shannon before turning around and headed downstream (feeling like you’ve a rocket strapped to you) a fast flat bike and a hilly little run around the town packed with support and noise.

After what felt like a lifetime swimming against the Shannon I was so relived to see the buoy at the turnaround I could’ve wept, as I made the turn I saw my wife on my inside doing the same, I tried to smile, or greet her in some way only to be met with a solid elbow to the side of the head (which she still denies), French women can be so touchy.

Four of us (all pulsers and close friends) crossed the mount line coming out of T1 at the same time like some set of lycra clad superhero rejects and played cat and mouse all through the bike and run. The weather was perfect the craic was 90 and Debbie ran the 10k with a shard of glass in her foot. Perfect day all round.

The people, without a doubt. The support during a race is brilliant, but the support knowledge and willingness to help day in day out from pulse members is unreal.

At the moment I’m training for an Ironman, so it seems like all I do is eat sleep and train. Other than that my two boys keep me on my toes, they’re 6 & 8 and full of energy.

Finishing my first long hard multipitch mixed climb in the Tatra mountains in Poland was a special day for me.

Nothing jumps to mind, I enjoy the day to day training, and craic at races, but I’ve no aspiration to go to Kona or anything like that. Right now even standing on the start line of a parkrun would be a dream come true.

Does getting a rest day and some sleep count as a Triathlon Goal? I’m training for a full, all going well I’ll get that ticked off in October.

I’m a sci-fi fan, I’ve re-read joe haldemans Forever Way a dozen times, I’m a Star Wars fan too – but I’ll watch and enjoy almost anything. My favourite TV series would still be Firefly, but the Mandalorian is coming along nicely.

I prefer to train without music or podcasts, but when I do pop the headphones on it tends to be music – placebo, foo fighters, nirvna etc.

Its hard not to be inspired by some of the exceptional people in the club – it makes the what you were certain was impossible seem achievable, Mike Gonda and his boundless energy, Mike Burke drive and engine, Debbie Carrs feral dedication to training, Jen Shortens ability to get shit done, but mostly it’d be my wife Marion.

Marion had a run in with cancer last year, and through surgery, radiation and variety of chemo she kept training, kept looking after the boys, stayed positive and full of humour, point blank refusing to let being sick define her. Its not many people that manage to increase their FTP over the course of a years cancer treatment. That bitch is a Badass.

Finally, what’s one nugget of advice would you give to a new member starting out on their Triathlon journey?

Dive into everything, don’t worry about coming last, or embarrassing yourself. You’ll get nothing but support, we’ve all been there and you’re never as crap as you think you are.