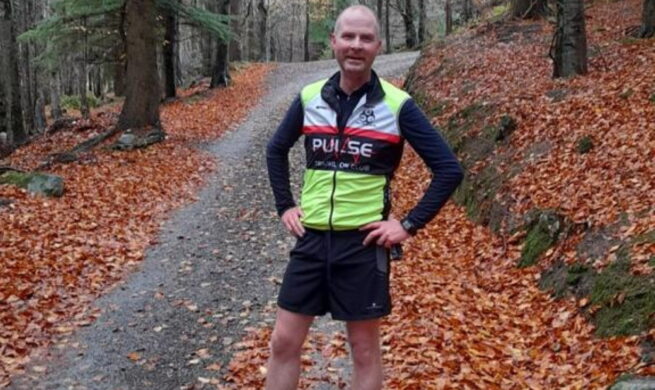 When did you join Pulse?

Had you any experience of Triathlon before joining the club?

Yes I did my first triathlon back in 2009. But please don’t think for a second that I am some sort of triathlon expert – it’s been a slow burn!

How and why did you get started in Triathlon?

An old friend of mine got involved and to be honest I did it for a bet. I joined because I am so inconsistent with my training, I felt that the club would provide greater motivation and discipline and it has worked.

I did a sprint distance at Lough Key in 2009. I was so unprepared. I got a loan of a really cheap short wetsuit that felt like an old tyre! I used an old mountain bike that must have weighed as heavy as a washing machine. I can remember queuing up to sign a disclaimer and thinking to myself, oh,
should I really be doing this! Anyhow, I skimmed the paperwork and signed it, all I remember was it stating something along the lines of ‘you must be able to swim something like 500 metres in a swimming pool without stopping’. Now this came as a shock, how stupid was I, after all I had signed up to a 750 meter swim. My next memory was waddling down towards the water to start the race. When I was waist deep in the water a woman turned to me and said, be aware, when you get out into the open water you will panic, everybody panics, it’s normal and you will be just fine, turn
on your back and remain calm. To be honest this piece of advice sent me psychologically over the edge, I gave a worried smile and thanked her. The race started and I totally panicked as this woman had said. Her advice was so amazing as I knew I was not alone, this happens to lots of people. I did exactly what she said and I was on my way, swimming breaststroke all the way. I was freaked out when I tried to do the front crawl because I couldn’t see anything! I got through it, sheer grit and determination was the key. It was an amazing feeling and plus I won the bet!

What’s your favorite race/distance to race?

I am new to the club so Pulse memories are limited, however I have to say that the Monday night open swims in Killiney are truly amazing. The sense of freedom is like something I have never experienced before and you feel safe because you are with other members and it’s not a race so you don’t have to go gangbusters.

I am a bit of a lone wolf when it comes to training and I realised that I do need to start making connections and so I decided to join the club. It’s a cliche but it’s true, being able to meet new people has been really great. Everyone has been so welcoming because my main concern was that everyone would be so intense about their training and race performance, when in fact it was the complete opposite.

When you’re not swimming or pedalling or swimming, what keeps you busy?

I completed the Dublin marathon in 2018 and 2019. Nearly killed me – but I did it. In 2019 I was the first male out of the water at the 500 meter Bull Wall Aquathlon. The weather was bad that day and to be honest I nearly dropped out! I received my winners voucher from base2base in the post about 2 weeks later and then I checked the results online. I was the only
male in that race. Ha ha ha a wins a win, right!

I would love to complete an Ironman.

What’s the next triathlon goal you’d like to tick off?

Don’t overthink it, just join and I swear you won’t regret it.

0
3
Pulse Triathlon Club @PulseTriClub
5 months ago
The word legend is thrown about a lot these days but the word and the day belongs to Mike Burke who this afternoon completed the Donegal Ultra 555k race. ultradonegal555

In light of the current pandemic and the significant challenges this crisis has placed on running events of this nature, we have taken the difficult decision to cancel our BMW Triathlon National… https://t.co/yn3Zes3hkn
View on Twitter
1
2
Pulse Triathlon Club @PulseTriClub
7 months ago
Brilliant work being done by Dee Needham and the Junior Committee to keep our juniors engaged during this time. Well done Dee 👏👏 https://t.co/4X4NjmvXFi
View on Twitter

Dee Needham is a club coach, as well as the Club's Children's Officer & Head of the junior section.

#WomeninSportIRE https://t.co/vZebdsAN9D
0
7
Pulse Triathlon Club @PulseTriClub
9 months ago
Our Junior Duathlon is of course cancelled this Sunday . Please note that we are liaising with TI in relation to the refund of entry fees. We hope to be able to reschedule the event later in the year.… https://t.co/NT5RUHLvMF
View on Twitter
0
3
Follow @PulseTriClub