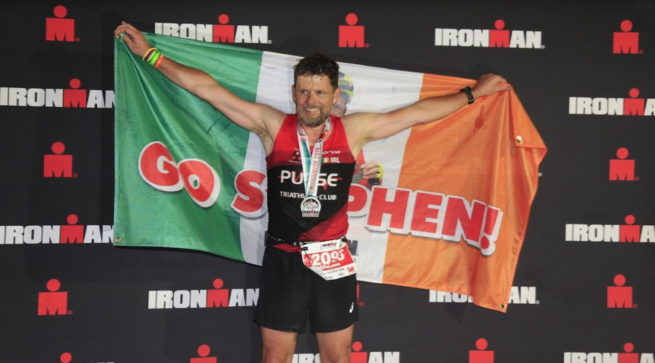 Having arrived in Wales on the Wednesday before the event I had plenty of time to get in a few swims, a short run and a look at some of the bike course. Ironman had everything well organised from the registration through to the briefing so by the time race day arrived I was itching to go.

My support crew of, wife, sons, daughter, brother and nephew pulled out all the stops and were fully quipped with all the necessary implements of support from specially printed flags through to “Road Beer”, the latter apparently being required to spend 14 hours plus walking around Wales.

Standing on the beach with over 2,000 other competitors at 7am listing to 20,000 people banging out the Welsh National Anthem (worth looking up) is impossible to describe but to put it into context AC/DC’s Thunderstruck paled in comparison.  Thankfully the conditions were very favourable, an 800-meter first leg against the tide was followed by a swim parallel to the shore and back into the start for the Aussie Exit and then back to do the same all over again. Tenby is notorious for big jelly fish and lots of them, but they decided to take the day off which was an added bonus. My only dark side was at one point looking around and thinking “shit I am last” but a quick glance at my watch told me that couldn’t possibly be and that it was more likely I was going the wrong way (typical). I managed to get through the swim in 1hour 29, not bad when I had originally hoped to break 1.30, so far so good, I was delighted and going good although slightly down the field, I even managed an extra couple of hundred meters for good measure.

If there is one thing you get sick of hearing about it was the notorious “Pink Bag”, this is used to hold a spare pair of runners to get you from the beach to T1, the bag is numbered and hooked up on the ramp off the beach, if you forget to take it with you it’s instant disqualification for littering. The run to T1 is straight up a 1k zig zag and through the crowded streets of Tenby. Tempted as I was to do this in my Speedo’s I decided to keep the wet suit on. This had to be one of my highlights, knowing that one stage was down, and I was on schedule. And in fairness the streets were packed with encouragement.

T1 was a full change into my bike gear and out on the road.

Having spent 10 months training up the Dublin Mountains I was somewhat looking forward to the challenge of the Pembrokeshire hills and they didn’t disappoint. Once again, this stage was well supported with major climbs delivering scenes similar those on the Tour de France. The first and larger loop started great for me and I was really making up ground lost by my inability to swim fast. During the early stages it was obvious that some had gone out with too much enthusiasm as the road was littered with causalities, at 35km I was brought to a complete stand still by an ambulance fully blocking the road but after 20 minutes of queuing and carry my bike around the obstruction I eventually got back on the road. The first larger loop runs for 112km and brings you back into the town for a second shorter loop. In both cases the organisers make sure that you take on as series of really tough climbs, Naberth, Wiseman Bridge (16%) and Saundersfoot being the highlights. Despite the challenge of these climbs I actually looked forward to them the second time around purely because the atmosphere was electric on the hills.

When I hit the 150km mark I knew I was well within my target time, so I started to save the legs and to make sure I took on as much food as possible, the plan seemed to work well for me and I finished the bike feeling good. Climb completed 2,600 Meters (8,700ft) in 7hours 15.

Into T 2 for a full change into my running gear making sure to lubricate all the correct bits and the end was in sight but for the slight matter of a Marathon.

Physically this had to be the most challenging part of the day after such a hard bike course. The run is four laps of the town with the first 3 miles going straight uphill and out of town then returning to the winding streets of Tenby. As with the rest of the day this was well supported and as the laps went by the crowd seemed to enjoy it even more, especially those outside the pubs on the main street.

There were plenty of fuel stations on the run which I took full advantage of. As darkness fell a lot of runners turned into walkers but thankfully everything held up for me and I managed to keep tipping over. My support crew really came into their own on the run, it seemed like they were everywhere which helped take my mind off the long challenge.

And then my highlight after 14 hours was making my way down the red carpet and collecting my hard-earned Ironman accolade and medal.

In summary, Ironman Wales is a great event, the support is phenomenal, the course is beautiful and it’s very doable despite stories of it being overly tough.  Getting there was a challenge but well worth it in the end.

Best sign of the day “At the top of the toughest climbs are the best views”, there were plenty of great views.

Thanks to everyone that supported me in this long journey especially my wife Diann who balanced my apparent moods, my training and moving to a new house, my little brother Phillip who joined me  in every event I did to prepare, from the Wicklow 200 to the Ring of Kerry and everything between, together we got so many medals this year that we ran out of places to put them. Thanks to Karen Nolan who kept me motivated despite having to listen to me constantly saying “I am not doing enough”.