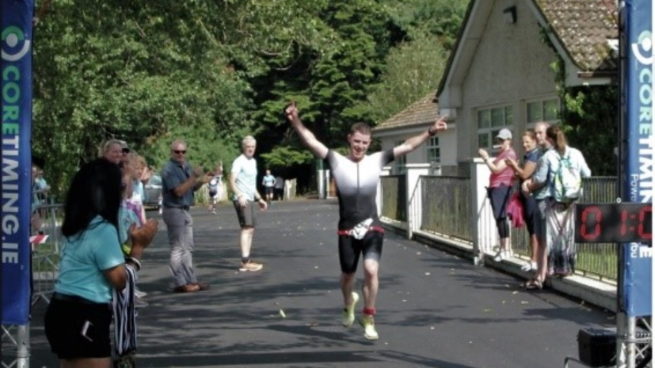 I decided to write up a report for a local race I completed this year, not national series but Triathlon Ireland were there. Local for me as this race is held by Virginia Triathlon & Cycling Club in Cavan. It was also the location for my first overall win in triathlon. The race itself is held in Virginia, Co. Cavan on the August bank holiday weekend.

The route is a 750 swim in Lough Ramor followed by a 20 km cycle that goes around the lake and finishes with a 5 km run through a forest. Lovely route even if I am a bit bias, home is only 20 minute drive away. The cycle has a hill in it but nothing to serious, roads are quiet, although you may come across a tractor tipping about, your in the countryside what do you expect. Back out onto the N3 and fly back into Virginia town.

I had raced this a few times and being from the area had a good knowledge of the cycle route cycling over from Bailieborough many a time.

This year was different than other years, there was some pressure. Last year I had come 2nd and I was on a good run this year. Earlier in the summer, the week after Ironman Cork I took part in another local race ran by Muckno Triathlon Club in Ballybay Co Monaghan coming 2nd overall. Always the bridesmaid as they say, with the 2nd places!!!

The morning of the race and was a sunny one. Done the usual registration, stickers on the bike and racked up. Mad for tar!!! Now just hang around waiting for the start.

There was a few from Pulse down for the race as Virginia is only an hour drive from Dublin and motorway for 90% of the journey. Chatting to them and also people from home. Seeing familiar faces from home was nice as don’t see them as often with being in Dublin. Some I would have cycling with when I started and since if am about at the weekend and would have looked up to. One man, Tony was one of these, a gentleman who does so much for the local area, couch to 5km, brought people out for cycles who are now taking part in sportive cycles and adventure races. He was also the first person who I knew who done an Ironman. Today he was ramping up the pressure on me telling me and everyone who would listen I was going to win. I was trying, and failing, to talk my chances down.

Out of the water in 7th and onto the bike, happy Dáire. Took a while for the legs to get going as could feel Tri Limits 70.3 triathlon from last weekend in them, powered on and got past a couple of bikes. Going up the climb on the back of the course could see bikes ahead so pushed a bit harder. Over the top and a slight flat where I overtook a lad on a tractor, I was motoring, heart rate 170 and above, on target. Turned onto the N3 at Virginia Transport and from here I knew the road like the back of my hand. Into the hard shoulder, head down, tt position and go.

Off the bike, 4th place. Got another place going through transition. A trail run awaited us. Again, happy Dáire. I loves the trail runs. Out onto the run course and could see the 2nd place fella just ahead of me, also heard 1st had about 2 minutes on me. I knew I had a quick run in the legs and decided to pace it and at half way kick for home. That plan lasted until I saw the lad ahead and put the shoe down to catch. Got him after 1 km. not set my sights on the next.

Should say there was also a duathlon going on at the same time. More about that in a bit.

At the half way mark there is a slight but steep hill, there I saw 1st place athlete, and I let the after burner, ALL IN!!! Heart rate up from 160s for the start of the run now 170s. Can I hold this?? Overtook him between 3 and 4 km mark. But to my surprise there was another man ahead who was running well but I was catching slowly. I noticed he did not have the ankle strap for time, is he in the duathlon…… Cant take the risk. And the effort increases again, heart rate now 180s…… We ran together for a few hundred metres but I eventually got past and held it to the line. Turned out he was in the duathlon and that last effort was not needed. He came over to me and said I didn’t have to push past as was in the duathlon. Can never be to safe!!

What a feeling 1st place!!! To make it even more special I had done it at home, my first win. Once recovered I was on cloud 9. Chatting to friends after from home and club members. That on top of the world feeling. Handy having a 20 min drive home for shower and dinner!!! A good day for the club with Siobhan Quain taking 1st woman place.

Would highly recommend this race, post race food was baked potato and could put beans and coleslaw with it, amazing and loads of cakes. Well ran event and chocolate milk at the finish line. Lovely setting for a race on the shore of Lough Ramor with plenty of parking in the local secondary school 200 yards from the start line and transition.