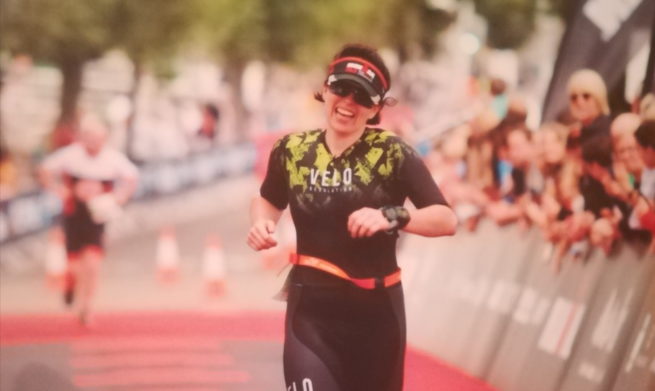 I decided to do a race report  on Ironman Dun Laoghaire 70.3 after a few people in the club had asked me about the race preparation, training , nutrition and the race day itself.  Before I get into the specifics of the race preparation,there is a couple of things I found invaluable over the last few months leading up to the race.

Training as a group was  great for motivation particularly on long runs and training with  different training partners I also found really beneficial.  Listening to the advice and feedback from coaches  and learning from more experienced members in the club really pushed me on in my training. Never underestimate the importance of a structured program for  any event, it keeps you focused. I incorporated strength and conditioning into my training  so 3 sessions a week ( where possible) for 20- 30 minutes for injury prevention which proved invaluable. Yoga also was great to prevent injuries. Appropriate nutrition and hydration also for training was an area which was key to my training preparation and on race day! I practiced my nutrition on the bike and run so it would reduce the risk of having any issues on race day!

In the 7 days before the race I focused on cutting down on fibre to avoid any stomach problems on the day. I  didn’t change my food intake and had the same carbohydrate intake I would normally have with  pasta and slowly increased my protein intake with protein milk and or  protein  shake  from Kinetica Sports.I also increased my protein with chicken and turkey. During race week, I stuck to the reduced volume of sessions and  listened to my body and plenty of stretching and foam rolling to avoid any last minute injuries!

The day before the race, I  ate a dry lunch just  a plain chicken burger and  plenty of water and I snacked on  protein bar an some nuts. Dinner was a chicken fillet  and dry pasta. I was in bed for about 8pm to get as much sleep as possible

Alarm went off at 4.50am. I got up an had a litre of  water with electrolytes.Then breakfast for 5.20 am which was porridge and toast with jam to give me some energy for the day. I headed down to the swim start sipping on vanilla protein shake from Kinetica sports and a banana.I got down early and did plenty of stretches  and positioned myself in  the time slot I wanted to race in which was 35 minutes so I could visualize the swim. I really pushed on the swim and I was  sitting in a pack for a while  which was great for momentum.The last 300 metres was difficult to sight but I kept sighting every 3 strokes instead of every 6  which made all the difference and I got into transition at 38 minutes.

Once in transition, I got changed quickly and composed myself. I had a drink of Lucozade energy which I had practiced using on of my long training  rides with it so I knew it wouldn’t upset my stomach. I had a cliff gel shot in transition which I had practiced  on the bike. Once dressed I headed out and took me a few minutes to get going on the bike. In my bike bag, I had  chopped up a mixture of cliff bars  and Kinetica protein bars into bite size pieces so I could grab and eat. I also had cliff gel shots in the bag to so it was easy to eat. Once on the bike, first hour on the bike I just settled into it, as I knew it would be at least 50k before I hit the hills and  preserving my energy  was an essential part of my  bike plan. I also had a sandwich taped to my bike (again I had practiced this) which was Nutella again to give me some energy which proved beneficial.

On the bike course, I was drinking every 20 minutes which was a mixture of water and electrolytes in my bottle and  lucozade energy drinks. I also ate every 20 minutes to keep my energy reserves and maintain and fuel myself on the bike. The climbs up the Sally Gap  were tough but having practiced the course I knew what was ahead of me and I could visual it .

I stopped at each of the aid stations to  refill bottles .The support on the route was  brilliant especially up the Sally Gap it kept me focused.

Once I got into Dun Laoghaire, I was smiling when I got into transition as I could see the support from the club and my family. I got into transition and  it was a quick drink of Lucozade and  I put my cliff gel shots in the back pocket of my tri suit as I would use them on the run.The run route itself was tough with the heat and I kept  taking water and electrolytes on board every 5k as well as  the gel shots every 5k. At 13k into the run, I started to tire and  I was feeling the impact of the 90k bike but seeing family and friends and the club members really pushed me on. I got through about 10 gel shots on the run again to keep fueling and as I had practiced with them on all my long runs and luckily  I didn’t have any stomach issues.

Once I crossed the line,the  tough hills up the Sally Gap were a distant memory and the pain on the run disappeared seeing my family there on the finish line. Training for any event whether its triathlon or a marathon  it  takes discipline  and hard work and as we all know time away from family and friends. The support from family and friends and club members  is immeasurable  and never underestimate how important they are in your training  preparation.