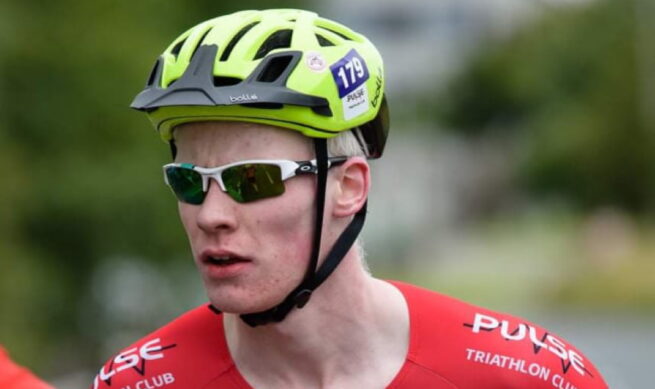 Well Chris, how’s the form? How’s everything going for you?

All is good. My season finished up in Skerries so I’ve taken a couple of weeks rest since then but I’ll be getting back to it this week.

I’ve been swimming since I was 4 (but never in a club). In 2016 the pool I was swimming at closed down for over a year. Someone I knew from swimming there had gotten into triathlons and encouraged me to come along to a swim + run session. I just went for the swim coz I hated running. Very reluctantly I agreed to give it a go and I was dead lucky because I got an hour of coaching from Gary Crossan. It was the improvement I saw in that hour that really got me interested in triathlon.

Pulse wasn’t my first club actually. I joined when my former club changed their policy and wouldn’t let me train with their adults anymore because I was only 16. Only problem was they didn’t have a junior set up at all. I was already racing with Ciat Joyce at that point (I’m visually impaired so I race with a guide) and I’d met a lot of Pulsers through racing at Port Beach and the odd sea swim. I had a good feeling about the club so it just made the most sense to join Pulse. In hindsight the change of policy was a blessing in disguise!

My first race was Loughrea Sprint Triathlon. I was only 15 but I did the full distance because there were no junior events for anyone competing with a disability. I’d been training for a long time beforehand so I was well prepared physically but on the day I was absolutely terrified! My resting HR that day was honestly about 94bpm! Even now my least favourite part of racing is the time you have to kill beforehand where you convince yourself you’ve forgotten something important. Thankfully I was racing with Ciat and he kept me a bit calmer (and he definitely helped a lot on a hilly bike course that day)!

That whole day is kind of blurry looking back. I just remember the nerves that started a couple of days beforehand and built up as the race got closer and closer. I have no real memory of the swim at all. To be honest, the only really vivid memories I have of the day itself are thinking “really? Another hill?” on the bike and then thinking the exact same thing on the run!

My ultimate goal at the minute is the Paralympics and that’s a Sprint Distance so that’s what I’ve always stuck to. I’ve never done anything longer yet so for now I’ll say sprints are my favourite, although I can definitely see myself moving on to longer distances once I’ve achieved what I want to in the short stuff.

There are a few that come to mind. Some of the nights in Killiney make for really happy memories, especially pre-pandemic. Actually it was really nice to have that back for the bake off last week.

Another one that comes to mind would be manning the water station at the Dun Laoghaire 70.3 in 2019. It was an early start and a long day but the atmosphere was incredible with so many Pulsers on the course. Also seeing Alistair Brownlee in the flesh was incredible. I was following him on the IRONMAN app as well and I’ll never forget he did the first 5k of the run in 16 minutes. Seeing people do outrageous things like that is something that really motivates me to push myself harder.

But if I had to pick one that stands out it’d be the Dublin City Marathon 2019. It was a brutally early start just to stop people pissing on the street but the day did improve to be fair! Once we were done with Pee Patrol a few of us took a Luas out to Heartbreak Hill to cheer on the Pulsers participating. Then back in to a bar near the finish line in the afternoon that was so packed with Pulse finishers you couldn’t move. The atmosphere through the whole day was just electric and it almost made me want to run a marathon.

In triathlon in general I think there’s a very healthy attitude and an understanding that winning isn’t everything. More than most sports we celebrate each individual’s improvements no matter what they are.

There’s great camaraderie and a fantastic support network that comes with being in a triathlon club although Pulse is extra special in this department. I don’t know why, but having been in another club before Pulse I just know it is.

Well over the last couple of months I’ve been trying to learn the guitar. I follow politics quite closely so I guess I put a fair bit of time into that. I’m currently rewatching all the Spider Man movies to se who’s the greatest Spider Man is (feel free to tell me who’s your favourite and why it’s Tony Maguire). But generally I like to pass any spare time either watching some rugby/football and chilling with friends. Pretty boring I know but that’s what gives me the most pleasure.

I brought my grandad over to Liverpool in 2019 to see Liverpool vs Leicester at Anfield. That was a real dream come true for both of us. We had high expectations for the atmosphere at Anfield but it still exceeded them, especially since Liverpool won the game in the last minute!

Maybe Kona one day. The Escape from Alcatraz triathlon seems like a very cool one. I like the concept and the history.

Not really triathlon, and maybe not once-in-a-lifetime either but I’ve always really wanted to do one of those 10 k Mud Runs. They just seem like a great laugh!

A sub 1 hr sprint. I felt like I was capable this year if everything went to plan but the season ended up being very disjointed with a lot of cancellations so it never materialised. The next step after that will be making sure I can consistently reproduce that.

I don’t read as much as I should in truth and honestly if I’m watching TV it’s either sport or stand-up comedy. A League of Their Own and 8 out of 10 Cats does Countdown are a good laugh.

Depends. If it’s a long, low intensity turbo session I can listen to podcasts like the Joe Rogan Experience. But if its anything with a higher degree of intensity it has to be music. It’s all 90’s at the minute with anything from Oasis or Nirvana to 2Pac and Nas. I like anything loud when I’m training and a bit of aggression doesn’t go a miss either, hence the 90’s rap.

There are certain athletes, like Michael Jordan who achieved excellence, even perfection but still never lost their hunger and they just kept pushing themselves and evolving. But I do take more inspiration from people I actually know, just on a personal level. When you have a friend or someone who you know very well and you know what they’ve been through, whether it’s illness or loss or something else, seeing them come through it stronger is the most inspirational thing for me.

There’s a lot of scope within triathlon to do what suits you. Find what you enjoy distance and training-wise and do that. And now that things are pretty much back to normal, get talking to as many people as possible!

Well it’s very random but I bought a Cameroon Jersey during the 2018 World Cup. To be honest I didn’t even know they sold Cameroon shirts in Ireland but there you go. My reasons were as follows: it was a nice jersey and since Ireland hadn’t qualified that year I thought it’d be a good laugh to cheer for Cameroon instead. Just to be a bit different, you know?

Anyway fast forward a week after me buying it and I find out that Cameroon… also hadn’t qualified. I had gotten the Cameroon flag mixed up with the Senegal flag.

I was in Spain while the World Cup was on that year so my lasting memory of that tournament will always be me sitting in a hotel bar wearing that jersey watching Mexico vs Germany on the big screen with all these Spanish lads sitting around looking at each other, then giving me a weird look that said “nah, he doesn’t look Cameroonian???”

And they’re probably right to be fair!