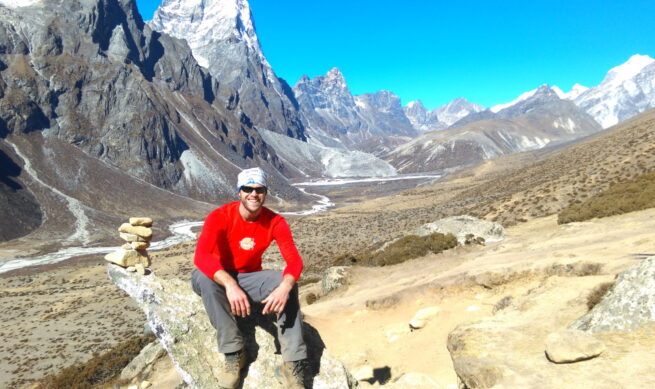 Well Darren, welcome to Pulse. How’s the form? How’s everything going for you?

Not bad, working away from home. Not loving the working exclusively from home for the last 18 months. Back from holidays in Clare and on the Aran Islands so that was a nice break. Loving the training. Its definitely been really enjoyable from joining a new club and meeting lots of new people to the new routine and the challenge of training in new and different ways.

There’s a few different things …. I don’t remember exactly when I saw it, but I remember as a kid watching a program about a triathlon, probably about Kona… I just found it fascinating. Obviously, they followed the leaders for the event… but also showed all these other participants and their stories and struggles as well. You could see people running into the night, struggling to keep going …. However slow they were going or however often they needed to stop, “Just Finish” was the thing that kept them going. It seemed so completely unachievable to me. At the time a marathon alone seemed to me like the biggest challenge anyone could take on. Here was this other event where you had already swum and cycled an unbelievable distance before you even started the marathon!

And also…. they’re a bit crazy when you think about it…. I mean…. Go for a swim… or go for a cycle…. Or go for a run… like, what’s wrong with you? Pick one thing! But no… you’re going to do the three of them together? And you’re going to turn changing your clothes quickly and going from one to another into it’s whole own challenge. Then a few friends of mine did an iron man a few years back. Just talking to them about their experiences kinda put triathlons in the back of my head again.

As for joining Pulse, I took part in a pulse duathlon out in Bull Island a few years ago and there just seemed to be a great atmosphere there. Everyone seemed to be getting on and having the craic, all while running a great event for the participants, so that stuck with me when I decided I wanted to join a club. Also I remember chatting to someone in the club after a run in the Phoenix Park. I don’t remember who it was but they were very encouraging and told me what a great club it was, so when it came time to pick a club I joined Pulse.

Tell us about your first race if you’ve already done it. If not, tell us about the plans for your tri debut?

So myself and a friend did a few sprint triathlons a few years back…. The first one I did was in Monkstown in Cork. It was great doing it. I remember turning up ridiculously early and underprepared (because I know everything now of course and have nothing left to learn!!). I think it might have been the first time I put the wetsuit on. There were a lot of other people doing their first triathlon, and I remember there was a really nice friendly atmosphere in the transition area beforehand. I don’t remember starting but I do remember being in the water thinking how is this still going on? I’ve been swimming for about 2 days now and I’m still not halfway around. My main memory of the cycle was just of being passed. A lot. By anyone and everyone who wasn’t already faster than me in the water. I had a big heavy hybrid bike so that didn’t help. I’ve improved the bike since then… not sure about the cycling though! I also missed the turn, so I did a few kilometers extra, as if I wasn’t slow enough already. I’d probably still be cycling if I hadn’t run out of land. The run in Monkstown starts with a steep climb straight out of transition. I set out determined to make up for lost time.. and was out of breath and gasping for air in about 50m. Eventually got across the line, and once I’d recovered we agreed to sign up for more!

Difficult to pick one thing here, meeting new like minded people, having people to train with, the coaches, the advice, the banter. I’m looking forward to my first triathlon with people in the club (Skerries next week). (although technically I think a few of us did Ballybunion this year, but neither of us realized there were other pulse people there)! I suppose I’d say the people. Everyone in Pulse has been really welcoming and friendly and helpful.

I’ve signed up for a few other non triathlon kinda races, Quest, Achill Roar, Hell & Back kinda thing, and I’m doing my first Gaelforce the week after Skerries. (I haven’t done much specific preparation for that… so I’m hoping the general training I’ve been doing will get me through that… we’ll see how that goes!)

I’d like to do more hill walking/hiking in Ireland but I haven’t found the time to do it consistently, but I’ve really enjoyed a few holidays I’ve taken doing these things. I’ve walked some of the Camino and hiked to Everest BaseCamp a few years ago. Year before last I climbed Kilimanjaro. I was planning Macchu Pichu or a biking/hiking trip in India last year, so that is still on my list.

On a more sitting on the couch kinda way I like watching rugby. Any Ireland or Munster game (controversial here? We haven’t had much to cheer about in a while…) I’ll try and watch if I can.

Well I am an Under 6 100m silver medalist in the Cork Community games (I think….) That’s my last podium finish so that has to be in there, right?

Being in Millennium Stadium in Cardiff or Doheny & Nesbitts in Dublin when Munster finally won the Heineken Cup in 06 or Ireland finally won the Grand Slam in 09 are both up there.
There’s not a specific memory but there’s a Ballycotton 10mile run that used to go ahead every year. Myself and my friends used always do it and it was always a fun catch up. And they give you a mug instead of a medal when you finish, so you have a mug for your tea/coffee whatever later when you’re sitting down recovering. What’s not to love about that?

Nothing specific now, but as I get to know more about different races, I’m sure one of them will spark my interest.

For now just trying to learn more and improve. I’ve done a few sprints so try and improve, and sign up for a longer distance event and see how that goes.

Give me Irish Heroes: 15 reasons to be happy, was a book I really liked. There were 15 chapters, and each chapter was about an Irish person. Most of them were people you’ve never heard of, but they were all inspirational stories in their own ways.

Books like Jack Ryan/Jack Reacher I really enjoy, especially on holidays, when you’re looking for an uncomplicated easy story.

Brooklyn 99 is a current favourite for watching after work with my housemates. It’s very silly but it makes us laugh. Anything like that or Community or Parks and Recreation I only recently found will get a watch.

Years later, the West Wing is prob still my favourite tv show (and the Newsroom too). I know it’s over idealistic and not the real world, but it’s kinda how you’d hope for. That got a rewatch last year during the height of the lockdown.
I’m a bit of a sci-fi/fantasy nerd as well so the Martian, Sweettooth, Gattaca, Sunshine, Good Omens, Stardust, Love and Monsters, The Princess Bride, MCU films, Serenity, A Good Place were all tv shows/movies I enjoyed. The Secret Life of Walter Mitty was one I really liked too.

For tunes, it’s a bit eclectic… Have a lot of tunes in the mix like lose yourself, sabotage, numb, immigrant song, heroes, hurt, that get into a lot of my playlists….. but then I’ll watch the Martian or Iron Man, and I have a playlist filled with Disco or ACDC, running along the canal with Rock the Boat followed by Thunderstruck.

I don’t know, when you read some of the stories of the competitors at the Olympics and Paralympics at the moment it’s difficult not to be impressed or inspired. The book I mentioned above is just about 15 Irish everyday people you could walk past on the street all being extraordinary in their own ways. And I do love a good underdog against the odds kinda story sporting or otherwise.

I’ve done the highest Bungee Jump in New Zealand, as well as a sky dive and a canyon swing.