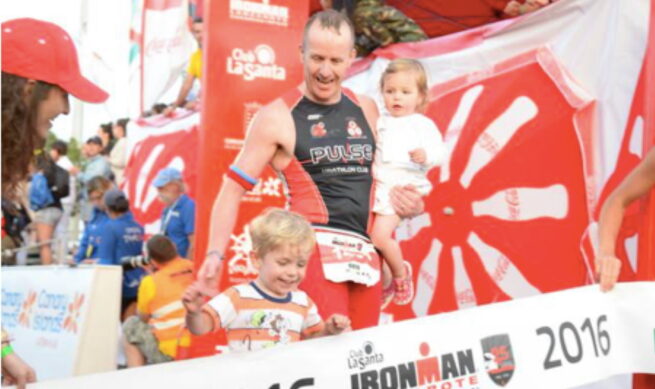 Well Derek, how’s the form? How’s everything going for you?

I was never interested I was asked to design the logo for the club by Alison & Liz way back in the day…I had also just recently had Knee reconstruction & had bought a bike for rehab & Alison (Who has a lot to answer for) said why not try a triathlon but sure I had never swam a length in my life but the the thought was put into my head…… I Should never have listened……..

My first race was Tri a try in Carrick & it was an eye opener.. I had never ran off a bike before let alone swimming in a river… Thankfully it was a 500m swim & all down river with a very strong current so i just floated down with the current..

We had no club gear in those days & a running vest was put on for the bike..

The Bike was uneventful but trying to run off the bike I couldn’t get my head around the not being able to run lark my head was telling my legs to run but my legs were going WTF… Finally I got running after about 3k & finished the race & had a cigarette at the finish line & that was it.. I was in….

I decided on the way home that day to ditch the Cigs…. (Well until the packet was finished)

I love Ironman.. The Training up to it, the crack with the lads & the day…. Ironman Lanzarote is my favourite race… I went in 2008 with some of the lads to Lanzarote to train for Ironman Frankfurt & Ironman Lanzarote was on at the time but after the 1st day Cycling in the hills & the “WIND” I wondered why people would put themselves through this madness. But 5 years later I was on the start line with all the other fruitcakes.. It’s everything they say & more I’ve had good days & I’ve had bad days there but if you get a chance Do It……… Even for the Crack the next Day….

Many a Kilkee walking around with bottle of Prosecco & bike in hand hours after the race trying to get home with one eye open… And the party that night Nuf Said..…….

A few of us headed to do Lanzarote that was some laugh. Vincent Galvin telling us a story about having to use a restaurant on the run for the loo as we arrived at said restaurant for a meal the following day….. Only Vinny…..

Dying on the run in Lanza 2016 & Matt Bird shouting at (Some Supporter) me to hurry up & finish as he wanted to go to Dinner he was starving ..

But I have 2 moments that will always stand out & they were my 1st year in Lanza & carrying my son across the finish line & 3 years later he ran across the line with me while I carried my daughter over the line moments I will never ever forget…..

Training with then lads & the slagging. Alan (Retired), Kevin (Retired & Too Old Now & Keep Falling over), Ciat, Barry O’Sullivan & Matt, too many to mention over the years. I don’t get to do any of the club sessions any more as most of the session times don’t suit me (I’ve 2 kids with a better social life than me) but I train with Matt & Ciat on the bike as much as I can & we have good oul banter while the lads work me over………

My Kids.. My 9 year old son has more training sessions than me per week with Soccer, Gaelic football & Hurling & my daughter in gymnastics & has also now started playing Basketball………. And my wife runs with Brother Pearse so life is very busy running here & there….

I played Rugby for St Mary’s College & I loved it.. I won various leagues & cups & those were brilliant days…. (And Nights)

I’m down for Ironman Mallorca in October……. Will it happen……. Let’s see

Anything to lessen the pain. I love music but can’t run with it on (I’ve too many arguments with myself in my head) I do try but keep hitting next song… but I do listen to music while on the Turbo.. Dance, U2, Foo Fighters Radiohead……..

Kevin Doyle for someone so old to keep going I only have admiration for……….. Only messing Kevin you know the truth……. 🙂

Enjoy every moment whatever race your doing don’t & get caught up with times & needing All the latest gear you don’t need it yet………..

That will come with time believe me I’ve an attic full of “The Fastest” gear…….

I hate the dark evenings & I’m shite at triathlons…………