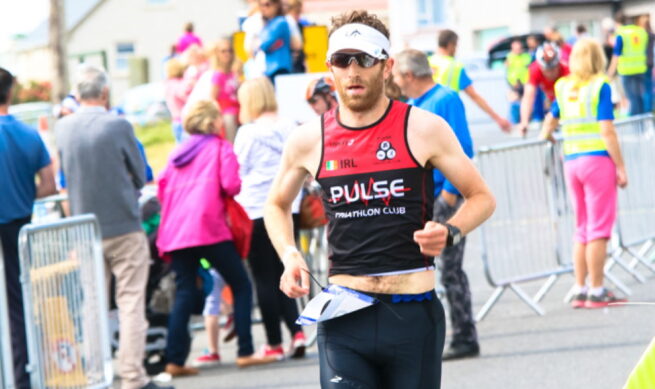 Well Eoin, how’s the form? How’s everything going for you?

Good and hopefully getting better now that the covid outlook is improving and summer is around the corner!

I actually don’t remember the specifics of how I ended up getting into triathlon. I didn’t know anyone doing one. Like most kids I was active in a variety sports when I was younger mainly thanks to my parents. I did lose my way a little through my college years and for a couple after when I started working full time in Dublin. I naively gave the Dublin marathon a go back in 2007 and that 5 hours of hurt kick started everything I guess. One of my brothers did the race and finished 90 minutes ahead of me. I did a lot of swimming when I was younger, so however I stumbled upon the idea of a triathlon the swim part was something that actually appealed to me.
I was working in Tallaght back then, about 500 metres from Westpark gym so Pulse was perfect really when I went looking for a club. I rocked up at the Wednesday night track sessions in the Winter of 2009 I think. (yes, they have been going that long) I have always loved the track sessions. The atmosphere is always great, not matter the weather. Lots of smiling faces with a subtle hint of dread for what might be in-store.

This was before I joined Pulse. North Tipperary Sprint 2009. It was the first triathlon on the calendar and I headed down to it with another brother who I had talked into doing it. It was a voyage into the unknown for sure. It was a pool swim so that went fine but I remember exploding on the second half of the bike. I have zero recollection of the run but I know it was not pretty. I was hooked though. That exhilarating post race feeling was (and still is) something you can’t buy. I find the feeling lasts for days. I followed that up another 3 or 4 sprints that year and the experience just kept getting better.

Olympic for me. I have done them all but I think the olympic has the best balance between the 3 legs. An ironman should have a 8k swim! It is hard to pick a favourite race. Mullaghmore in Sligo has a sprint and if the weather plays ball it would be very hard to beat. The triathlon takes over the village for the day. The swim is in a very scenic horseshoe bay, fast bike course on a good road but the highlight is the run course. It is on a costal loop and its spectacular. It is famous for big wave surfing. I did Challenge Roth in 2014. It does live up to the hype. The 70.3 in Dun Laoghaire that went up the Sally Gap was also a favourite so I hope that one makes a return in the future.

Sitting on the grass, post race after Kilkee in sunshine with 40/50 other Pulsers. Can’t remember the years exactly but there were a couple that if I could time travel that is where I would go. Just real quality time. In terms of specific racing moments going up Solar Hill in Roth was very cool.

Like-minded people who are excited by the sport but appreciate that it should be fun. I probably haven’t been to as many club sessions as I would like for one reason or another in recent years but anytime I make it to the track or Killiney on a Monday night the friendly nature of everyone both old and new is just amazing. No barriers or awkwardness. Just sound people.

When you’re not swimming or pedalling or running, what keeps you busy?
Family and work like most I guess. I have a 5 year old son so I have my hands full there. I work in product management and started a new job in January which was crazy for a while with the homeschooling but thankfully it is beginning to settle down now.

I am from Carlow and also an Aston Villa fan so the sporting memories have to be my own! I went back and did the Dublin marathon in 2016 and knocked 80 minutes off the previous time so that was progress. Outside of that, competing in the U-8 frontcrawl at community games in Mosney is right up there!

Alpe d’Huez long course. I’d like to cycle some of the famous climbs in France so doing this one as part of a triathlon is a challenge I would like to take on.

I have entered the Sheephaven half. Probably know in the next couple of weeks if it will happen. It has a chance. Fingers crossed. I need to get back swimming. I ordered some extra insulation for my head last night so the return to the sea is close.
What’s your favourite book/movie/tv show? What do you like about them?
I do like a good war story so Band of brothers, Saving Private Ryan, 1917 are shows I like. They generally cover themes of friendship enduring (or not enduring) through incredibly though situations which can be inspiring. In terms of books I generally read biographies – sports and business. Favourite ones that come to mind would be Andre Agassi, Mike Tyson, Paul McGrath one.

Mainly I’d listen to an array of sports related podcasts on a run or turbo. GAA hour, On Running, Fitter Radio Triathlon, oxygen addict. I’d scroll down through a list and line them up. I’d throw on the odd David McWilliams / Pivot one as well in an attempt to educate myself. I am a big fan of Steven Scullion’s journey to Tokyo. He has been very raw and honest on it. Gives great insight into mind of an elite athlete. I’ve also been doing some zwifting over the last few months and for the races I go onto spotify and just auto-play some random cycling playlist!

It’s probably special moments in people’s lives more so than anything that I take inspiration from. When friends or family achieve something they have worked hard for in life or sport. Watching Rachel Blackmore win the grand National was the most recent sports event I watched where I went ‘WOW’!

Only my own thoughts…but I think consistency in training is one the most important factors in progressing. It sounds easy but can be hard to achieve. 2 runs, 2 swims, 2 bikes a week for several weeks in a row as an example. And you don’t ever want to ever kill yourself in a session. You need to enjoy it! Always need to keep an eye on the next training session and be mindful of the upcoming one even when you are in the middle of the current one.