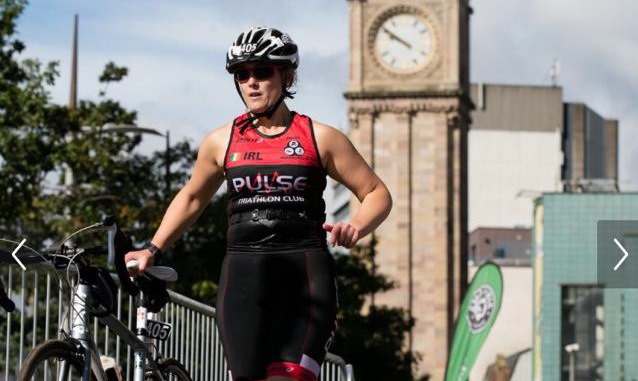 Well Karen, how’s the form? How’s everything going for you?

I’m good thanks, all things considered! It’s been a really strange year for all of us but to get to December and have your health and your family around you is the most important thing about 2020. Although I am fairly gutted there is no Pulsemas this year.

This could be a very long story but I’ll keep it short! I suffered really bad with my knee and I thought it was down to my weight. I had a consultant tell me that running would probably be out of the question, so I stuck to walking to help me lose weight and get fit. And no sooner had I lost weight I was like feck this, maybe I’ll try a 5km! I did my first 5km run in August 2012 and I got such a buzz I was like what’s next! So I started researching & was like I think I want to try a Triathlon. I bought my bike in December 2012 and joined Pulse the minute we hit 1st January 2013!

Ah the great TriAthy, is it everybody’s first race! It’s very local, there is a nice river swim which is shallow enough if you are unlucky enough to panic. There is huge support all around the town! It just ticks all those boxes for first race! I trained hard for this race. I had a fairly good swimming background, as in I felt confident in the water, in fact I actually love the water although not on cold days! I hit up Balrothery every Tuesday night! I would do some gym work, run and cycle every week! So I felt really prepared for the race! Also at the new members day in Pulse we learnt how to do transitions with Dave Adams which really helped! Anyway fast forward to race day!

Super nervous but super excited, had a great swim, then jumped on the bike. I planned to wear bike gloves, oh how naive I was! My hands were so wet that I ended up only wearing one, the wrong way round & carried the other one using it to wipe snots from my nose! Out onto the run, never going to break any world records here but to think I had got this far I felt like a superstar! I finished in a decent time of 1:36 which was timed on a Casio stopwatch my brother had loaned me! The feeling of finishing your first race is immense! Probably some disbelief but I was so determined to get that finish line I would have crawled to get there!

My family and friends had made it down to Athy, not to see me cross the finish line I might add as they got stuck in traffic! I celebrated like a queen that night dancing in heels with my friends, I have wised up a lot more since then & ditched the heels.

Favourite race would have to be HOTW (Hell of the West) Purely cos it scared the shit out of me for so many years that I did it as a Relay twice before I pulled on my big girl pants and flew solo. Also, you may have heard the after party is pretty epic.

Oh my God this is a tough question, I probably have way too many! Catching up with everyone on a Monday night in Killiney, pre-race day pints, apparently it will help you sleep! Waking up on race morning and afraid to pull back the curtains to see what the weather has in store. Race day excitement and cheering everyone on as they zoom by me on the bike, not always overtaking me, some in the opposite direction.

Supporting my friends at Ironman Barcelona and watching them achieve their goals. Amazing. That trip to Frankfurt… biggest Pulse gathering outside of Ireland I think. But my favourite memory so far has to be finishing Lisbon half Ironman before the gantry was blown over and our Chairperson Jen had to crawl under it to register her time!

This question should actually be, “What is the best thing about being in the one and only triathlon club that is Pulse!” It’s amazing and it literally change my life! I have made so many friends and we have travelled so much together. It’s just been a blast and I really hope that we get travel & race again in 2021.

Travelling, I love to travel and I love my holidays!! But if anything, 2020 has taught me to keep my feet firmly on the ground to live in the moment!

I’ve been dying to answer this question, I’m actually an All-Ireland Karate Champion!! Myself and my brother started karate when were about 8/9 after watching the Karate Kid! Although it kind of runs in the family as my Dad was black belt in Judo. But there was too much rolling around on the matt for my liking! I literally wanted to kick some ass.

I’ve achieved that in racing the half Ironman in Dublin in 2015! I do not think I have ever, ever been prouder of myself! And to do the training and to race with so many of my Pulse friends was a honour & privilege. I have to add that the buzz around 2015 when Ironman came to town was electric.

I’d like to think that in 2021 I will complete a triathlon preferably an Olympic distance and somewhere down the country where we can recreate the hype, buzz and excitement that triathlon brings to all our lives.

Keep it real & have fun!! When I first joined the club the thoughts of doing a Sprint was daunting, but that’s where I started and I built on it! Next up was an Olympic and I thought I was only deadly! My goal was always to get to a Half distance & I have completed it twice. And I’m happy to stop there!!