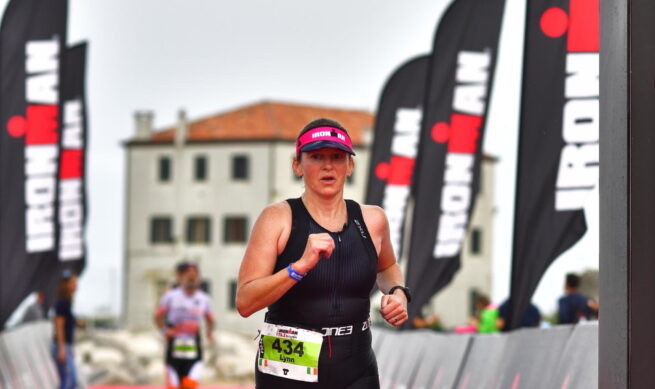 Well Lynn, how’s the form? How’s everything going for you?

Still feeling the post-race effects of my Ironman 70.3 on Sunday. Legs most definitely knackered. Other than that, alive and well.

It’s been quite a long road. I took up swimming at 29 (I’m 51 now) and it has been part of my life ever since then. I also started running 10ks a couple of years after that, but nothing competitive, just a few runs like ‘Run in the Dark’ etc. I guess it was when I hit 40 that I began to think about trying for half marathons and so running came to dominate the early 40s, with a career best of 1h49 min (Stramilano in Milan in 2014). The triathlon idea came to me around five years ago as it seemed the perfect fit to the other two, and, after a long recovery from an IT band injury (where I had to re-learn to forefoot run), I knew I needed a balance to running. To be honest, yoga also invaded my life at that point and has been a big feature ever since – it really is amazing.

Trying to get better at the bike part led me to Pulse to be honest. It’s like a mental block for me, and I went along to a couple of early morning session with Ciat & Co in February 2020, which I really enjoyed. The other attraction of Pulse was Tallaght – I grew up in Belgard Heights so I always feel at home cycling around there. The pandemic followed and I joined in a few Zwift sessions with the Pulsers – the conversations were hilarious and just kept me going to be honest! Whilst I travel a lot (work and husband in Italy), I do hope to make more sessions in the future. I suspect I’ll always be on the fringes given other demands, but nonetheless, the Pulsers advice has really been invaluable. So good to have a supportive club around you.

Olympic Tri in Majorca in 2016. I went to the tech meeting the evening before, and, having only really done running meets, I felt I’d walked into a room of high powered athletes – body fat was in scarce supply. I nearly died as the guy running the debrief kept talking about penalties and rules, and there I was waiting for the line you get at running events ‘just go out enjoy yourself’. It never came. Not that triathlon is that hard core – but that was my first impression! I was terrified. The race was brilliant though and Oh my God, the buzz of finishing it. So much better than just running – like you’ve had to master three disciplines and do transitions which requires dedication and focus. Such an achievement.

Definitely Olympic. The 70.3 on the weekend confirmed that!

I truly feel like a virtual member so far given the pandemic – hope to change that in 2022. I went along to the barbeque and it was lovely to chat to people and get advice. I am also thinking I could join some of the group cycles – I have never felt at the right level before, but I averaged 28k at the 70.3 (it was flat), so maybe….!

Having started the tri journey as an individual, if I could go back, I would’ve joined a club earlier. There’s quite a lot to master in triathlons and even if you’re doing a Sprint, you do need to invest in some gear, so you need advice and support. Speaking to other Pulsers, I think there are probably a good few of us who are more sporadic in attending club initiatives and I think Pulse has that flexibility in its ethos – that’s really important too.

I’ve been fortunate enough to travel the world doing aircraft leasing. I am a wheeler dealer at heart – I broker aircraft deals, be them in Saudi, South Africa or Russia.

As anyone who knows me will tell you, I am complete gymnastics nut. I used to coach in Old Bawn, and I follow artistic gymnastics in almost an obsessive fashion. I was even supposed to be in Tokyo! Favourite sporting memory is thus gymnastics – I would say Carly Patterson winning Gold individual all around in Athens 2004. I was there!

The Ironman Jesolo 70.3 was it, no question there.

Next one is an Olympic, back in Majorca in May next year. I’m really looking forward to working on improving the disciplines vs endurance based training.

Music: I will always have an indie vibe going. So you’ll go from The Cure to The Killers to Post Malone all in one playlist.

In triathlons, Emma Pallant. She always does the Majorca tri. Her attitude is amazing. She is so mentally tough.

In gymnastics, Aly Raisman. Not a natural talent, but did it all through hard work and dedication. Amazing attitude and resilience, not least when representing the gymnastics fraternity during the Larry Nassar scandal.

Yes, you will need a wetsuit. Joking aside, I would say, if you have always had that itch to challenge yourself beyond the local Park run, why not? Sport is also about discipline and planning; if it was easy, everyone would do it. The psychological rewards are huge. And when I heard Emma Pallant say in a Hoka video as part of the tech debrief for Jesolo (I will post it) ‘you are an athlete’… that still makes me emotional.

I think I must’ve been Italian in another life. Italy has been a huge part of my life. If I’m not in Dublin, you can be pretty sure I’m probably drinking an Aperol Spritz in the Bel Paese.