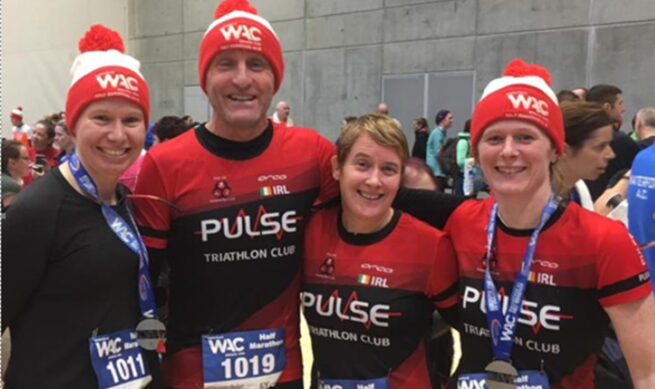 Well Susan, how’s the form? How’s everything going for you?

All good, can’t complain. Working from home at the moment so making the most of the situation.

I’m from Athlone so watched the Athlone triathlon on a few occasions (back in 2008-2009 ish). It was a huge event at the time and a brilliant weekend of racing. The celebrations after were even better so I decided I’d have to give it a go. I need-ed the excuse to celebrate!!

I swam as a kid and had a long hiatus after I left school, college etc… Life got in the way. I eventually started back swimming in 2008 and used to swim with a group in the Carlisle gym (Ben Dunnes). One evening there I met Ger Kennedy. He was on-ly starting off on his swim journey. We got chatting about swimming, triathlon etc… and he mentioned he was a member of Pulse. He was leading the beginner cycle group one Saturday and suggested I come along and see how I got on. I think it was the furthest I ever cycled. I was exhausted but exhilarated. I also went to the open day which was soon after and the rest is history.

Tell us about your first race

Athlone triathlon 2010, sprint distance. My brother was competing and he persuad-ed me to give it a go. As I swam regularly that wasn’t too much of a worry. Though it had been a long time since I had been in open water so I was a bit nervous. I bor-rowed a wetsuit, I think it a shorty. I got through the swim ok, a few bumps and belts but nothing to traumatic. I remember the transition was in the barracks that year and I was hobbling up after the swim struggling to undo the zip, someone ran by and yanked it down as they flew past. Ha, I was so grateful. I had visions of cy-cling in it! I did the 20km cycle on a mountain bike. Now that was tough going. It certainly doesn’t help when everyone was flying by. The run had a huge crowd competing on the course and it went through town. Although I wasn’t in Pulse at that stage there was a huge amount of support along the way from competitors and the supporters.
The craic was great and I think by the end of the day I had signed up for my next race.

For me Frankfurt IM was pretty amazing. It was my first ironman and I don’t think I’ve ever felt so race ready. In saying that I won’t be doing it again. There was a great group of Pulsers doing it that year and the buildup, training and experience was what made the race so special. We had sun, rain and hail that day. Typical Irish weather just perfect. I’ll always remember the run though. The run was a loop down by the river. On my last lap there were ducks on the course. They started chasing the guy in front of me. I always remember thinking how in god’s name am I going to out run some ducks at this stage, I was wrecked. Thankfully I was let pass.

I’m still a bit undecided about distance. I’ve raced long the last few years. I need to get back to the short stuff. I think I prefer Olympic distance over a sprint. I’m not a sprinter! Mind you I am inclined to love a race after it’s over.

One of the first memories I have is my first weekend away in Kilkee. I had been re-ally nervous beforehand. Finishing that race with the support from Pulse along the way was amazing. The after party was the best craic. We sat in sun for hours going through bottle after bottle of prosecco. Then had to cycle back to our apartments and get ready for a night out. I think everyone hit the dance floor that night….such fun.

Obviously there have been loads of other great times.
Mallorca 70.3 is up there too. Been chased down on the bike by Dervla Owens and just about holding on for the run!! Probably not my finest hour as I ended up in the medical tent with dehydration. But had good company there with Paul Cunnigham!! We had a great few days.I could go on forever here but I do have to mention IM Barcelona. There were a huge contingent of Pulsers both competing and supporting. There was also a group from Athlone and both my brother (Charlie) and sister (Lorraine, member of Pulse also) were doing it. My entire family were there. The 3 of us finishing with my folks and husband there was special. Once the race was done it was one big party and I don’t think I’ve had such a good a night since!! Mind you the pandemic hasn’t helped. As long as there is a Pulse crew you are guaranteed to have a good time.

Definitely the support and friends you make along the way. Before joining pulse the most I ran was a 10km normally the women’s mini marathon once a year. I thought running was boring and 10km was a form of torture. I had never cycled. Without the club I would never have dreamed of running marathons, completing multiple 70.3 and 2 full IM’s. At this point I probably should say I’m easily lead and when some-one suggests we should do such a race I’ll have signed up before I even think of what’s involved.

Work and life in general. Hopefully we can start travelling again soon as I have a few aerlingus vouchers to use.

The Dublin marathon in 2016. Not my first but my fastest. Had great company that day and like all memories above there was a great night after it. Bit of a theme go-ing here!
I also did a 100 x 100m (10km) pool swim in 2019. I had never swam more than 4-5km. It was a charity event my brother organised. I was still swimming in the Car-lisle with a group of friends. I persuaded all of them to do it and they all completed it. Week on week we would be upping the mileage. The most we swam before the day was a 7.5km session. It was a very proud moment. We were also the first team to finish it on the day and raised a lot of money for charity.

I actually don’t have one. I’m just going to keep doing what I’m doing as long as I enjoy it. I’m sure I’ll be persuaded to enter something again someday.

I think I was a bit worn out after the long stuff so I’m just trying to find the love of tri-athlon again. The competitive streak seems to have vanished for now. Maybe a sprint or Olympic towards the end of the summer if any go ahead.

I love reading. Mostly crime and thrillers. I’ll watch anything except reality stuff on TV. Can’t stand that rubbish.

I’ve never trained with music or podcasts. Mainly because it can’t be used on race day. I like the quiet and it gives you time for your own thoughts. If I’m on the turbo that’s different, I’ll switch on the telly. Definitely need distraction then.
I’ve only started to listen to podcasts recently on walks.

Mainly family and friends. Everything I’ve done sports related has been family per-suasion or because of the people I’ve met in my years in Pulse. I’m always amazed at what you can achieve with the support and comradery of others.

I don’t think I have much to add that others haven’t said before. Go to club sessions and you’ll get to meet some like minded people. It will be the best decision you’ll ever make. You’ll make lifelong friends. They may lead you astray though so do be careful. You’ll be signed up for something before you leave the session!! Make sure you go to the social nights out…always a great occasion.

In light of the current pandemic and the significant challenges this crisis has placed on running events of this nature, we have taken the difficult decision to cancel our BMW Triathlon National… https://t.co/yn3Zes3hkn
View on Twitter
1
2
Pulse Triathlon Club @PulseTriClub
1 year ago
Brilliant work being done by Dee Needham and the Junior Committee to keep our juniors engaged during this time. Well done Dee 👏👏 https://t.co/4X4NjmvXFi
View on Twitter

Dee Needham is a club coach, as well as the Club's Children's Officer & Head of the junior section.

#WomeninSportIRE https://t.co/vZebdsAN9D
0
7
Pulse Triathlon Club @PulseTriClub
1 year ago
Our Junior Duathlon is of course cancelled this Sunday . Please note that we are liaising with TI in relation to the refund of entry fees. We hope to be able to reschedule the event later in the year.… https://t.co/NT5RUHLvMF
View on Twitter
0
3
Follow @PulseTriClub