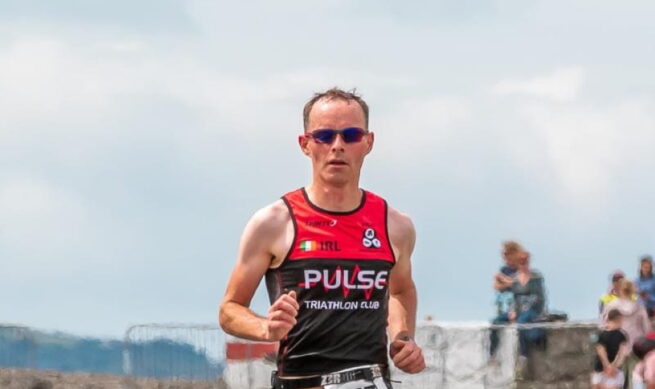 Well Vincent, how’s the form? How’s everything going for you?

In better form now that I’ve gotten a few races in. I was starting to get hungry for a triathlon!

It happened by accident like a lot of people. I’d been away travelling and liked the active feeling. When I got back I was sitting beside a college friend at a wedding who’d done a couple of triathlon’s and my ears were perked.

Roll on that Christmas (2007), I bumped into a work colleague in Hogan’s one night out and he happened to be in Pulse. The rest is history. I don’t think I even asked Google if there was another tri club in Dublin. What would I know about any of them.

My intro was a casual swim session that was in Sportsco. I could just about ‘swim’. Then on to newby peeps bike in the Phoenix park and Sportsworld runs. Running with proper runners (people, not shoes) was some shock to the system. Taking off on the first interval like I was Kipchoge and nearly falling over after 300m. The legs cramps I got after that first run session I still remember!

My first race like many was TriAthy sprint (2008) – and it certainly was a roller coaster of emotions. Blistering hot day it was. I was all set with my old skool steel frame racer (gear levers on the down tube) and flat pedals.

750m downstream swim – I managed to swim into both banks of the Barrow before exiting.

20k out and back cycle back then. I’d gotten to the turnaround and was on the way back to town when my back wheel exploded. It had expanded with the hot day in transition and I’d discovered the hard way that my €150 investment in a racer on the Buy and Sell came with perished tyres! That wasn’t going to end my day though, I ran the 5k back into town with the bike (flat pedals remember) and headed on the run. I did manage to break 2hrs!!

They all have their quirks. Least favourite distance to race for me is Ironman. It’s a long slog where you’re fairly shackled in terms of ‘racing’. I’ve always found the Ironman training enjoyable, I love getting out on long spins and runs.

There’s a great buzz from pushing max on a sprint, but also great control on a half where you can push on knowing it’s only 5hrs (ish)!

I joined the club early 2008 so there are quite a few.

Kilkee in its hayday was special. We had a carnival down there where everyone raced hard, supported one another and then when the last Pulser crossed the line the bubbles flowed – and lots of them.

In terms of pure race enjoyment, Caroline Kearney Tri 2017 was special. I think it was club champs, there was a group of us in a death match in the bike & run. Think it ended up there were 6 of us within 2 mins at the finish.

In terms of the craic, IM Lanza 2018 will take some beating. Seriously, the briefing should have a warning in bold about Route 66!

Triathlon is still a sport that a lot think comes with an ‘attitude’. When you’re in a club, it’s really where you see how inclusive the sport is for everyone and it doesn’t matter what level you’re at or distance you want to race. That was always a key mantra for Pulse when I joined. I made a lot of good tri friends in the club that made the sport so much more enjoyable. I haven’t been as involved the past few years – but still love being a club member.

Work is work – mostly from home. It goes through peaks and troughs by its nature.

Other than that I love the outdoors. Hiking and gardening are probably the two headlines. That could be anything from hiking in Wicklow along a dot that’s headed into hedge of fur bushes on the maps.me app or trying to trying to keep the flowers deaded headed in mid summer. Both good for the soul.

Being from Westmeath, GAA success has always been a rare occurrence. I hit my GAA obsession in the early 90’s and used to travel to any Westmeath game I could get a lift to. The summer of 1995 came with All-Ireland minor football success – nothing like it before. Took a long time for there to be a cow milked in Westmeath after that one! Some day that was on Hill 16. The same day that Charlie Redmond famously got sent off twice and the Dubs bridged a 12 year gap to win Sam.

My own proudest achievement was cracking a sub 3 Dublin marathon in my one and only stand alone marathon in 2017. I’ve taken a few filthy looks off others over that stat!

Kona is fuelled by a commercial powerhouse that wants to keep it on it’s high perch, but it’s never really been something on my bucket list. Not sure that there are any races like that really for me. I would say the most enjoyable race that I’ve ever done was the Dublin Marathon in 2017. The experience of running through 42k of the most incredible support you can imagine I’ll never forget.

I’ve given up chasing times. The next goal is to have a full season of racing. Fingers crossed for 2022

I do love my monthly National Geographic 😊

Impartial to an old Ross O’Carroll Kelly tale too.

Keeping away from the regular cliché’d shows, a couple of series that have ticked the boxes are Shtisel and Fargo.

Not really that sort of guy! I just flick on the radio usually to whatever’s on. A great way to just hear what’s going on in the world as you ramble along.

Even more so because it’s so topical right now, but any para athlete is truly inspiring. The dedication and determination that’s required to overcome the hurdles that life has put in front of their progress put’s a lot of things into perspective.

Never forget the basics, this is not your job, you’re doing it for fun. Start at the start; basic equipment and step by step grow into the sport. Pay no attention to people doing Ironman! If it’s what you want to do some day, then let that be your driver – don’t let being pulled into Ironman turn the sport into misery. You’ll quit.

I started out with my ‘solid’ steel frame racer with flat pedals – did me fine (after I replaced the tyres).

Time is irrelevant in a race, it’s where you are relative to others in the field. Why chalk down a PB in an Olympic distance with a 36k cycle and 9k run? Even for a race that’s accurate, the weather from one day to another could swing times wildly. Just go hard and give it 100%.

You don’t need to flog yourself to improve, just be consistent and make sure you get enough recovery. Train smart, e.g. bike intervals will help you run better, a little appreciated fact.

It might not be too Covid compatible, but travel is something I love. There are plenty of interesting stories that could be told on a long drive down to the Lost Sheep! From dodging questions in Quetta from displaced Taiban peeps about Sadam Hussein to hiking to K2 base camp, and that’s just the one country scratched!