The swim is in the same location as last year with an extended course for the Olympic race. Swimmers will be in the water for circa 9:45am/10am with the sprint off first about 9:30am. There a 4m tide on the morning and it is relatively sheltered but the wind is mostly westerly in Westport so if it does rise on the day with you could be swimming into it for about 300m. 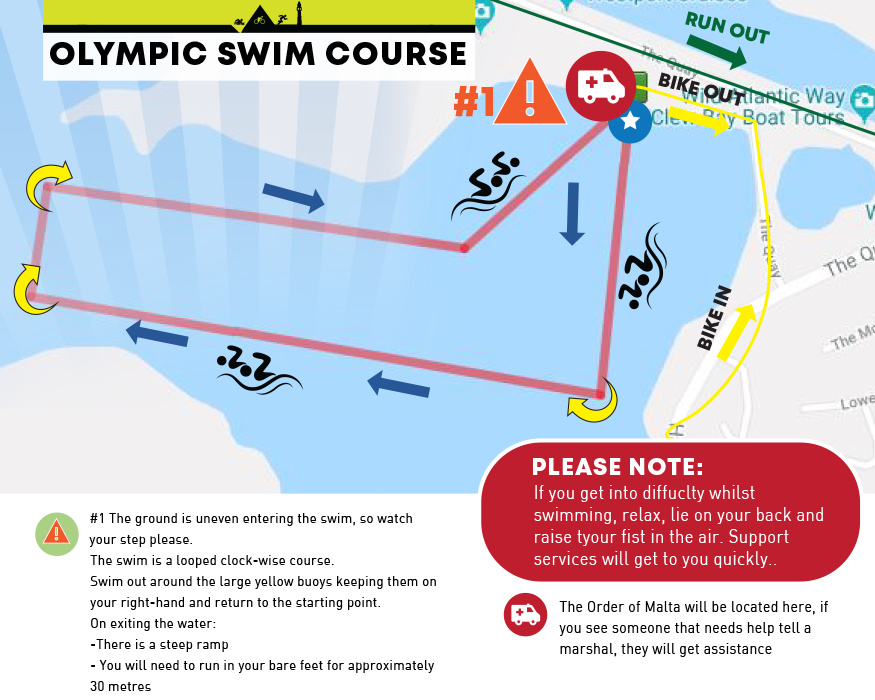 The bike is on open roads but is very well marshalled. The profile will suit everyone with only a couple of gentle drags along the way with none climbing higher than 20m. It is a course built for PBs.

It heads for Louisburgh and will turn around about 2km from town , there is a slight drag around Croagh Patrick but apart from that its flat , if you have a westerly wind the back 20km will be fast. 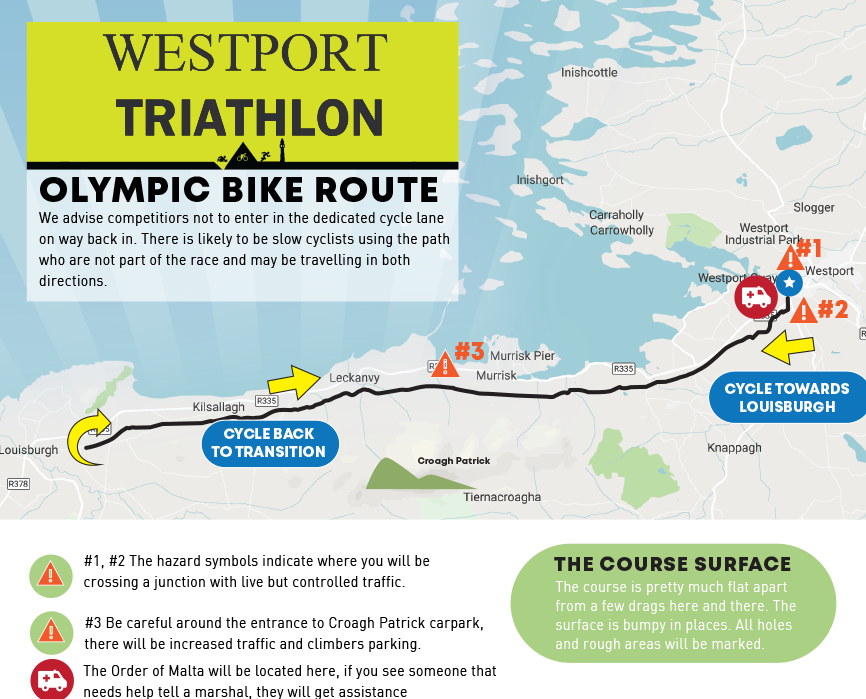 The run takes place on mixed terrain, from hard stone to gravel but with grass areas for those wanting to take a softer approach to their run. As you can see, it is technical enough with 2 turn points with a drag coming at about 1.5k in but what goes up, must go down, leading to a fast finish. It is likely to be two loops of the 5k sprint course. 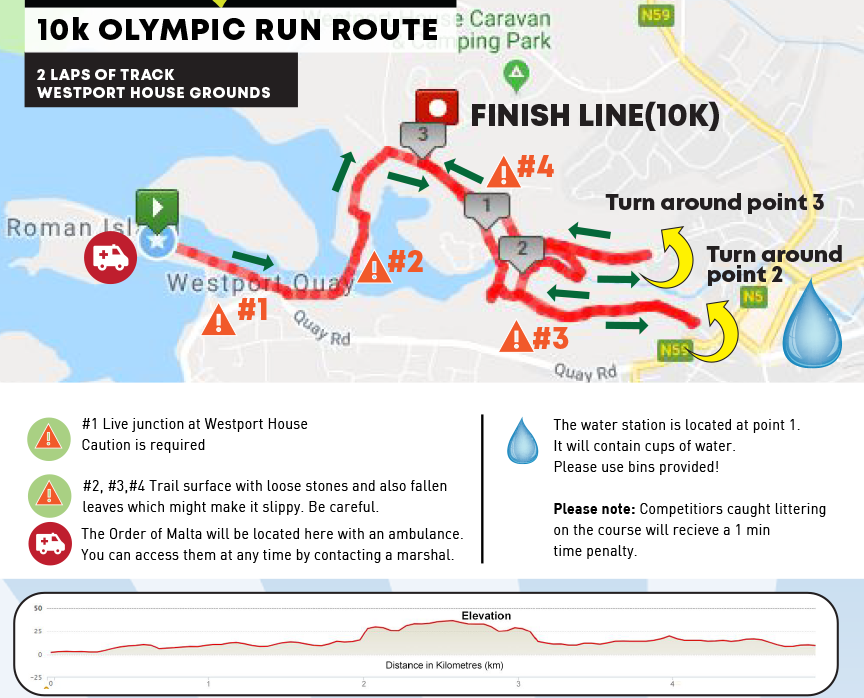 Why did you select “Westport Triathlon”?

I’m from Mayo and of course Westport which is on the Wild Atlantic Way is a great setting for a Triathlon. It was my first open water triathlon in 2012 and I’ve completed the race every year since. I heard about the race online I think.

Was it your first time to tackle this race distance?

It was in 2012! I had completed a pool based triathlon a few weeks before hand.

Did you change in training or do differently to prepare?

I completed a couple of the Phoenix Park Duathlon series in April and May of that year to get used of running off the bike. Still not great at it!

Was there any nerves considering it was the first time you were taking on this distance?

Always nervous at the start, even though I would consider swimming my strongest of the 3 disciplines. The atmosphere at the race start is great and takes your mind off the start. Always great banter between athletes, marshals, and spectators at the start.

What had you heard about the race course before showing up on the day?

Its west Mayo in June- the weather can change in 5 mins so be prepared to keep your gear dry in transition.

The Atlantic can look ominous, it’ll be mid- June so still cold (does it ever warm up)- but once you get in and keep moving it is grand!

Flat fast bike course, can be windy but as the Sprint is an out and back route the wind will be on your back for half of it.

Not sure what the Olympic route will be this year.

Did you have an expectations of times going into the race or a plan and did you manage to stick to it?

No not the first time just wanted to finish. My transition went wrong with wetsuit issues, so I worked on that for subsequent races!!

Since my first Westport Sprint Triathlon I’m always trying to improve my time. Some years I’m quicker, some years the west of Ireland weather wins out and I’m happy to finish!

Was there anything that surprised you that you think others would benefit of knowing before taking on this race?

It’s a fast course but the weather can be a major factor with this race so you might need to change your expectations on the day.

How well was the course marshalled?

Very well marshalled, no chance of going astray on the swim, bike or run.

Participant Safety is to the fore. Very good race briefing at the start.

Swim is very well marshalled with local lifeguards onshore and also on the course in kayaks, The Irish Coastguard Depot is actually situated near the start, so they always have a presence there on race day also.

Roads are not closed for the cycle, this is always addressed at the Safety briefing before the race start.

The run is 95per cent in the grounds of Westport House and flat with no vehicle traffic.

Most importantly, what was the post race food and what was in the goodie bag?

Post race food at the finish is great- Pizza, Pasta , Cake, Beer! All great for recovery. The goodie back usually good too.

Westport is great town to go out in as well.